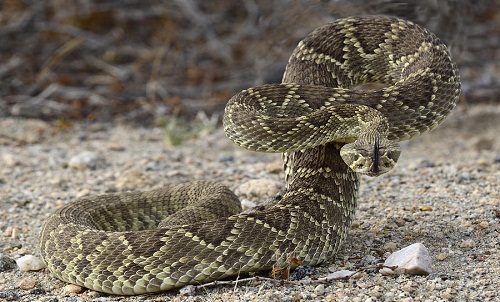 Pitvipers or Crotalinae snakes are all venomous, and are distinguished from other snakes by the two pit organs under their eyes.

You probably have heard that snakes can see in infrared light – which is seeing light by temperature. This is not necessarily true for all snakes, but some snakes, like pit vipers and constrictors, have pit organs (or loreal pits), that can sense infrared light and send that information to the same part of the brain that controls sight. Pit vipers get their name from these pit organs in between their eyes and nostrils on either side.

Pit vipers range all over the world from the white lipped pit vipers of Southeast Asia, to the diamond back rattlesnakes of North America.
Rattlesnakes are probably the most well known of the pit vipers, and they are only found in North and South America.

There are over 190 species of pit vipers in the world, and 44 of them are rattlesnakes.
Like the Colubrids, pit vipers have one big long lung and one very small lung that is almost non existent.

The Gaboon Viper is the largest snake in the pit viper family, weighing more than 45 pounds and getting up to 6 feet long! (1.8288 meters)
Gaboon Vipers are native to Africa and although they are highly venomous, they are extremely non aggressive. Crazy enough, these are one of the most docile animals out there!

Almost all pit vipers give live birth. The eggs fully develop inside the mother so the babies come out already slithering around. But some basal Asian pit vipers make an exception to this rule.

This may seem like it would keep people safe, but this could become a real problem in the future. There are already species of animals that have adapted based on humans. For example, house spiders have adapted to the consistent temperature of a house and will die if put outside, or just run back in. If we kill off the rattlesnakes that do rattle, then the snake that doesn’t rattle and just strikes could be the only one that survives to reproduce, which is not a good thing.

Some people, in an effort to save the rattle snakes, will capture and cut off the rattle snake’s rattle before relocating it so that the snake can be safe from humans. But this just promotes rattlesnakes without rattles, which can be more dangerous, since they are so camouflaged, that rattle can really help you spot them before you step on one!

The best thing you can do is leave it alone. No snake wants to harm you in any way; biting is the very last resort for a snake. And even if a venomous snake were to bite you, 50% of venomous snake bites are “dry”, meaning they don’t pump any venom.

A snake doesn’t want to waste its precious venom on something they can’t eat, so as long as you don’t harass or corner the snake, it will leave you alone.

All it wants to do is eat and curl up in a dark hole where it can feel safe. Snakes want nothing to do with humans – they truly aren’t a threat to us as long as we aren’t encroaching on them. In fact, they are helpful to humans, as they eat poisonous animals and rodents that carry deadly diseases.