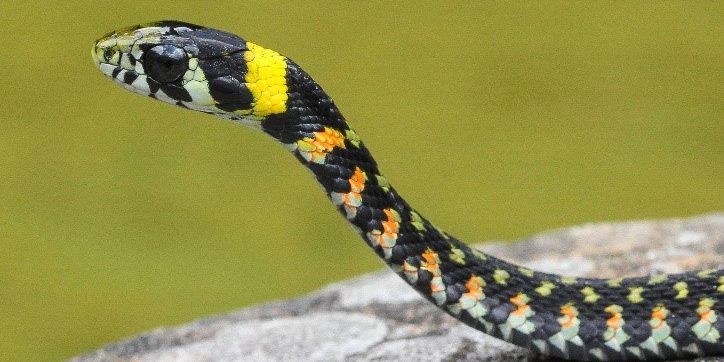 Venom and poison are often confused with each other. Both can be deadly, but they each are used for different purposes.

Venom is typically used to hunt and kill prey, and is injected, like a wasp, snake, or spider. Whereas poison is used more as a defense thru swallowing, inhaling or absorption through the skin.

There are many species of poisonous toads, but their poison varies in toxicity. Many such toads can be harmful to smaller animals and pets like dogs and cats, but don’t really affect humans. It is a myth that toads give you warts. Common warts come from a virus that is transmitted thru contact, no toad needed!

Another more unusual example of poison is found in the Blue-Capped Ifrit (Ifrita kowaldi) of New Guinea. They eat poisonous beetles. The toxins from the beetles go into their feathers so that even when a human handles one, they feel numbness, tingling, and sneezing. But, it also helps ward off parasites that would live in their feathers and on their skin.

Venom can be used as a defense, as seen in wasps and bees, but is typically seen in some species of venomous snakes like Elapids, and

But there is one strange venomous snake that is also poisonous.

The tiger keelback (Rhabdophis tigrinus) is a colubrid endemic to southeast Asia, is both rear fanged venomous and poisonous. It has developed a poison gland on the back of its neck that it can crack open, spraying out yellow poison that causes burning pain and foggy vision.

A scientist learned that the snake was poisonous, and that they should always wear safety goggles when dissecting an animal. Because as he cut into it, the poison shot out directly into his eyes!

Go through this quiz to test what you’ve learned!